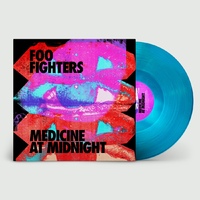 Medicine At Midnight is the tenth studio album by American rock band Foo Fighters, released in February 2021 via Roswell and RCA Records.

Medicine At Midnight is produced by Greg Kurstin and Foo Fighters, engineered by Darrell Thorp and mixed by Mark “Spike” Stent. The album packs nine songs into a tight 37 minutes.

Medicine At Midnight features three singles released prior to the album “Shame Shame”, “No Son Of Mine” and “Waiting On A War”.

Grohl states the album was inspired by "Our love of rock bands that make these upbeat, up-tempo, almost danceable records”.

This album is limited edition on 140 gram blue coloured vinyl with a printed inner sleeve and insert, pressed in Europe via RCA Records.