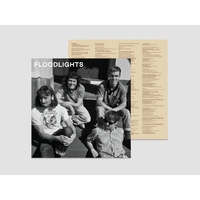 Floodlights - From A View

From A View is the debut studio album by Australian rock band Floodlights, released in July 2020 via Spunk! Records.

On their debut album From A View, Floodlights present a distinctly Australian perspective, with a shambolic, catchy sound that melds 80s alternative rock with 90s New Zealand jangle- pop.

This full length album explores themes of identity, personal crossroads and the misuse of power in the modern world. Historical awareness remains a central pillar for the band's material, and is often a theme that shines through various songs from the lyrical content.

This album is a limited edition of 300 copies on black vinyl with a printed inner sleeve, pressed in Australia via Spunk! Records.