Featuring Lindsey Buckingham (guitars, percussion, vocals), Stevie Nicks (vocals), Christine McVie (keyboards, vocals), John McVie (bass guitar), and Mick Fleetwood (drums, percussion, harpsichord), Rumours is considered to be one of the band's best albums. It has featured in several publications' lists of the best albums of both the 1970s and of all time.

Recorded during 1976 at The Record Plant in Sausalito, California, and produced by the band with Ken Caillat and Richard Dashut, Rumours was both a critical and commercial success.

It is Fleetwood Mac's highest selling album, and one of the highest selling albums of all time, selling a certified 27.9 million copies, earning the album an R.I.A.A. Diamond Award. The album also received the Grammy Award for Album of the Year in 1977, and the album's first single "Go Your Own Way" held the number 10 spot in the US Billboard charts.

The album reached #1 in many countries, including Australia, US, UK, Canada and New Zealand.

This is one of “The Captain's” all-time favourite albums and captures the band members personal relationship emotions and struggles at that time, in the song writing and performances on this album. Although having moved away from their original blues roots, the songs have an edge to them that create an emotional connection, which still resonate to this day.

This album is a 2011 reissue on black vinyl with a printed fold out insert, pressed in Europe via Reprise Records. 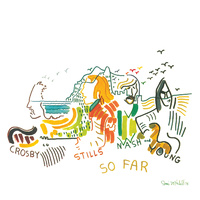