Helplessness Blues is the second studio album by American indie-folk band Fleet Foxes, released in May 2011 via Sub Pop Records in the US and Bella Union Records in the UK & Europe.

Props to Helplessness Blues for making the fretless zither cool again. Fleet Foxes continue to take their music in unusual directions, creating a baroque folk-pop sound that hints at a number of influences - Simon & Garfunkel, Fairport Convention - but is too unique, too esoteric, to warrant any direct links.

It's a downright gorgeous record, filled to the brim with harmonies and the sort of stringed instruments that are virtually unknown to anyone who didn't go to music school (and even if you did, when's the last time you rocked out on the Marxophone?).

Relying on obscure instrumentation can be a dangerous game, and Fleet Foxes occasionally run the risk of sounding too clever for their own good, as if the need to "out-folk" other groups is more important than writing memorable, articulate folk tunes. But Helplessness Blues has the necessary songs to back it up, from the slow crescendos of the album-opening "Montezuma" to the sweeping orchestral arrangement of the encore number, "Grown Ocean".

Robin Pecknold remains the ringleader of this Celtic circus. His is the only voice to cut through the thick, lush harmonies that Fleet Foxes splash across every refrain like paint, and his lyrics reach beyond the territory he occupied on the band’s first album, which painted simple geographical portraits. On Helplessness Blues, he's just as interested in the landscape of the human heart.

Still, it's the music that stands out, and the band's acoustic folk/chamber pop combo makes every song sound like a grand tribute to back-to-the-land living.

This double album 2LP record set is on black vinyl housed in a gatefold with fold out double sided poster and a digital download card, pressed in the USA. 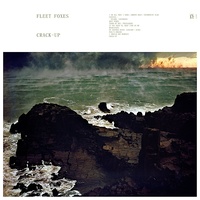