Yo La Tengo - And Then Nothing Turned Itself Inside-Out

And Then Nothing Turned Itself Inside Out is the ninth studio album by American indie rock band Yo La Tengo, originally released in February 2000 via Matador Records.

Yo La Tengo (often abbreviated as YLT) formed in New Jersey in 1984. Since 1992, the line-up has consisted of Ira Kaplan (guitars, piano, vocals), Georgia Hubley (drums, piano, vocals), and James McNew (bass, vocals). In 2015, original guitarist Dave Schramm rejoined the band and appears on their fourteenth album, Stuff Like That There.

Despite achieving limited mainstream success, Yo La Tengo has been called "the quintessential critics' band" and maintains a strong cult following. Though they mostly play original material, Yo La Tengo is renowned for its encyclopedic repertoire of cover songs both in live performance and on record.

This culturally literate, emotionally rich album has allusions to "The Simpsons", legendary author Thomas Pynchon and myriad independent films, while exploring the many facets of relationships.

"Tears Are In Your Eyes" and "Madeline" are prime examples of Georgia Hubley's buttery voice; "The Crying of Lot G" is a '50s ballad. "Our Way To Fall" showcases Ira Kaplan's enigmatic voice against the dreamy backdrop of soft drums and lilting organs. "Everyday" models a plaintive guitar against hushed vocals. It sets the mood of the album, a delightfully sombre tone.

Meanwhile, "Saturday" and "Cherry Chapstick" are about the unpredictable, full of random piano bursts and chaotic harmonies, promising that this indie rock group has more to deliver than immediately meets the eye-or, more fittingly, the ear. It's an enduring album and an important one.

This double album 2LP record set is a 2018 reissue on black vinyl housed in a gatefold sleeve, pressed in the US via Matador Records. 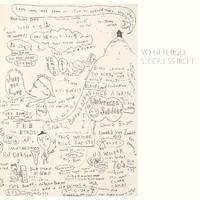