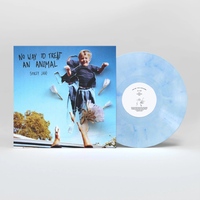 Spacey Jane - No Way To Treat An Animal

No Way To Treat An Animal is the debut EP by Australian indie rock band Spacey Jane, originally released in November 2017 via Spacey Jane.

Spacey Jane is an indie-rock, garage Australian band who formed in 2016 in Fremantle, Western Australia.

Due to persistent demand from their loyal fanbase, Spacey Jane are releasing limited edition coloured vinyl pressings of their much loved earlier EPs No Way To Treat An Animal (2017) and In The Slight (2018).

This EP include fan favourites “Feeding The Family” and their debut single “Still Running”. Their third single “Thrills” is also included on this EP.

This EP is a limited edition 2021 reissue on 10” blue and white marbled coloured vinyl at 45 RPM, pressed in Europe via Spacey Jane.