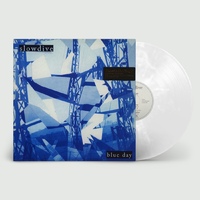 Blue Day is a compilation album by English shoegaze band Slowdive. It was originally released in 1992 and compiles the first three Slowdive EPs: Slowdive (missing the track "Avalyn II"), Morningrise (in its entirety), and Holding Our Breath (missing the Syd Barrett cover "Golden Hair" as well as "Catch the Breeze", which appeared on their first full-length Just for a Day).

This album is a 2020 limited edition reissue of 3000 individually numbered copies on 180 gram white marbled coloured audiophile vinyl, pressed in Europe via Music On Vinyl.