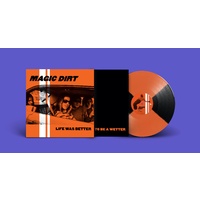 This limited edition EP is a 2020 reissue on orange and black quad coloured vinyl at 33 ⅓ RPM with a printed insert and remastered audio, pressed in Australia via Emergency Music.