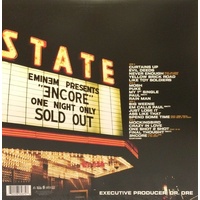 Eminem went on hiatus after touring in 2005, releasing Relapse in 2009 and Recovery in 2010. Both won Grammy Awards with Recovery finishing up as the best-selling album of 2010 worldwide (his second international best-selling album of the year after The Eminem Show). Eminem's eighth album, 2013's The Marshall Mathers LP 2, won two Grammy Awards, including Best Rap Album, expanding his record for the most wins in that category and his Grammy total to 15.

Encore was recorded at 54 Sound Studios and was produced by rapper Dr Dre. On it's release it was a critical success, with critics praising Encore as an album that "showcases a phenomenally gifted musician and lyricist doing all the things he does best" and "funny, catchy and clever".

In its first three days of release, Encore sold 710,000 copies, and went on to sell over 1.5 million copies in its first two weeks of release in the United States, earning 4x Platinum by mid-December. Nine months after its release, worldwide sales of the album stood at 11 million copies, making history as the first album to sell 10,000 digital copies in one week.

This Double LP Vinyl Record a 2013 reissue on 180 Gram Vinyl and is housed in a gatefold sleeve and was pressed in Europe.