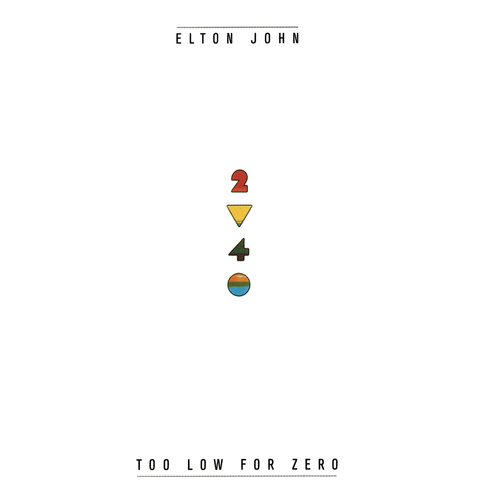 Too Low For Zero is the seventeenth studio album by British singer-songwriter Elton John, originally released in May 1983 via Rocket Records.

In Elton John's five-decade career he has recorded more than 30 studio albums, selling 300 million records, making him one of the best-selling music artists in the world, with over fifty Top 40 hits, including seven consecutive No. 1 US albums, 58 Billboard Top 40 singles, 27 Top 10, four No. 2 and nine No. 1. For 31 consecutive years (1970–2000) he had at least one song in the Billboard Hot 100. His tribute single, re-penned in dedication to the late Princess Diana, "Candle in the Wind 1997" sold over 33 million copies worldwide and is the best-selling single in the history of the UK and US singles charts.

Too Low for Zero marks the reunion of Elton John with lyricist Bernie Taupin for a full album of new material, after a seven-year period of working with various other writers, and sees Elton’s music advance to the breezy, stately tunes that characterise his later period. The change is thematic too, so he deals with ‘the biggies’ of religion and complicated relationships rather than the rather more intense character-led works of previous records. In truth, this yields some mixed results in terms of how relatable the songs are to anyone raised remembering when rock was young, but the whole is a rewarding, sometimes remarkable work.

He begins with one of those more personal works, though. “Cold As Christmas (In The Middle Of The Year)” is a terribly sad portrait of marital decay, told through relayed phone calls and accompanied by Elton’s piano. Those bigger ideas begin to seep through as we reach the middle of the record – “Religion” may be told from a singular perspective, but it’s a lofty attempt to show inconsistencies in one of pop’s more difficult areas to traverse.

Most notably, this often-belting record spawned two of Elton’s biggest singles, “I’m Still Standing” and “I Guess That’s Why They Call It The Blues”. The first of those forms an umbrella for the album’s themes: Elton’s back, and stronger than ever (at least in intent). Indeed, the rockers on this album are among his very best – the friskiness of “Crystal” and the double-whammy of “Kiss The Bride” and “Whipping Boy” are all exemplary, unfussy workouts. “I Guess That’s Why They Call It The Blues” forms another main thematic device, of epic relationship worries, but is by far the strongest example thanks to its casual sense of regret, of a genuine ache to be with his lover. Featured on this track is beautiful harmonica playing by Stevie Wonder.

Falsetto on the concluding “One More Arrow” shows Elton portraying vulnerability with affecting ease, and brings to a close a fine record – exactly when he needed one.

He may have released better works overall in the 70s, but with Taupin back on board, the classic Elton John Band back together in the studio (Davey Johnstone, Nigel Olsson and Dee Murray), and with Chris Thomas on production duties, Too Low For Zero is a terrific record, an exemplary illustration of what a veteran artist could achieve in the early '80s.

Check out the tracks: “I Guess That’s Why They Call It The Blues”; “I’m Still Standing”; “Kiss The Bride”; “Cold As Christmas (In The Middle Of The Year)” and “Too Low For Zero”.

This Limited Edition LP with remastered audio and reproduced original artwork, replicating the original die-cut and embossed sleeve, is pressed in Europe on 180 gram heavyweight vinyl via Mercury Records.