The Universal Want is the fifth studio album by British rock band Doves, released in September 2020 via Heavenly Recordings and Virgin EMI.

Doves formed in Manchester and adopted their name in 1998. The band is composed of twin brothers Jez Williams (guitar, vocals) and Andy Williams (drums, vocals), and Jimi Goodwin (bass, vocals, guitar). The band employs Martin Rebelski, as a touring and session musician on keyboards. The band released four studio albums between 2000 and 2009, two of which reached #1 on the UK album charts.

Doves went on hiatus in 2010 and returned in 2018, performing for the Teenage Cancer Trust at London's Royal Albert Hall on 29 March 2019. Further festivals, including some dates with Noel Gallagher, were subsequently announced. Now in September 2020 the band are releasing a brand new album The Universal Want.

Dropping breadcrumbs in rare interviews since they announced their return in late 2018, Jimi Goodwin, Andy and Jez Williams have remained reluctant custodians of their barely-kept secret of a new album throughout last year’s busy period of memorable festival and outdoor headline shows.

Coming together to confirm themselves, once again, as an artistic unit for the first time since sessions ended on 2009’s Kingdom Of Rust, the cherished Manchester trio hint that The Universal Want has become an equally poignant and celebratory document of both time passed and time recouped.

The album has been met with universal acclaim by music critics with Paul Moody reviewing the album for Unuct magazine with a 9 out of 10 rating saying “…cathartic comeback from the kings of Northwestern noir" and concluded, "With their fifth album they're taking strength from sadness, hope from despair, and wisdom from experience. In troubled times, The Universal Want is exactly what we need…”

This album is on black vinyl housed in a gatefold sleeve with inner sleeve, pressed in Europe via Heavenly Recordings. 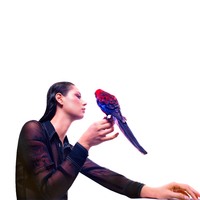