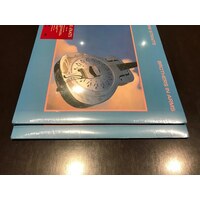 Share:
$45.90
In Stock
There are small dents in the top right and bottom right hand corner of the covers - see photo attached.

Brothers In Arms is the fifth studio album released by British rock band Dire Straits, originally released in May 1985 via Vertigo Records.

29 Million copies sold. Third best-selling album of all time in the UK. First album to succeed in the CD market, Grammy winning, earner of enough Platinum to build a house: Brothers In Arms is a phenomenon on every level. Its production raised the bar for all music to come, its songs and videos became household items. It also almost destroyed the band.

By 1984, incessant touring and recording schedules hadn’t dimmed Mark Knopfler’s enthusiasm for perfection. Having taken over the production duties on previous album Love Over Gold, he now went even further towards a kind of pop-oriented Americana.

Brothers In Arms has a fine array of chart moments, including, of course, the Sting-assisted video hit “Money For Nothing”, the moody “So Far Away” and faux bop “Walk Of Life”. But it gets them out of the way in the manner of mere aperitifs and then massages you with a suite of Knopfler’s very fine brand of JJ Cale-lite. Along with gruff nods to Dylan and James Burton. Like contemporaries U2 they had the golden touch that made their gold instantly more American and mythical than most acts from the States.

They toured this album for two years. After that amount of time surely any band would falter. They certainly had a very long hiatus. This album was bigger than them. On that final night of the tour in they must have never wanted to hear a note of this album again. Twenty years on, it’s still echoing around the world. As inescapable as ever.

Brothers In Arms brought the atmospheric, jazz-rock inclinations of Love Over Gold into a pop setting, resulting in a surprise international best-seller. What kept the record selling was Mark Knopfler's increased sense of pop songcraft and it remains one of their most focused and accomplished albums, and in its succinct pop sense, it's distinctive within their catalog.

Check out the tracks: “So Far Away”; “Money for Nothing”; “Brothers In Arms”; “Walk Of Life” and “Your Latest Trick”.

This double album 2LP record set is a 2020 reissue on 180 gram audiophile vinyl housed in a single sleeve with printed inner sleeves, download code, with audio mastered from the original analogue and digital masters by Bernie Grundman and Bob Ludwig, pressed in Europe via Vertigo Records.