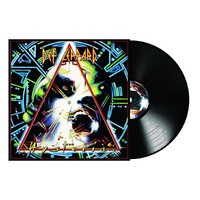 Hysteria is the follow-up to the band's 1983 commercial breakthrough Pyromania, which was produced by Robert John “Mutt” Lange. Hysteria took over three years to make and was plagued by delays, including the aftermath of drummer Rick Allen’s car accident that cost him his left arm on 31 December 1984. The band stood by Allen as went through rehab and learned to play drums with his right arm using a combination of acoustic and electronic pedals to recreate the sound of a full drum kit. “The Captain” can remember watching a documentary program on TV about Allen and his work to learn to play drums again, cook and lead a normal life with one arm – it was truly inspirational.

Lange as a producer set out to make a hard rock album on which every track would be a potential hit single, and he used a combination of acoustic and midi sampled sounds to create what now stands out as a distinctly 1980s sonic soundscape, with layered guitars emphasising melody rather than hard rock riffs, and sampled drum sounds.

The resulting album comprised 12 tracks clocking in at a massive 62 minutes, which has been their longest album to date.

Hysteria has become Def Leppard's best-selling album to date, selling over 20 million copies worldwide, including 12 million in the US alone, and spawning seven hit singles.

The album charted at number one on both the US Billboard 200 and the UK albums charts.  Hysteria is the 51st best-selling album of all time in the US.

The singles released from the album were “Animal”, “Women”, “Pour Some Sugar On Me”, “Hysteria”, “Armageddon It”, “Love Bites” and “Rocket”.

This double album 2LP record set is a 2017 reissue on 180 gram heavyweight black vinyl housed in a gatefold sleeve with printed inner sleeves, pressed in Europe via Bludgeon Riffola.