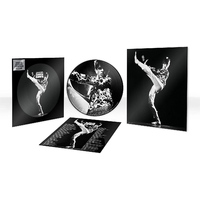 The Man Who Sold The World is the third studio album by British musician David Bowie, originally released in the US in November 1970 and the UK in April 1971.

David Bowie recorded the album with producer Tony Visconti at Trident Studios in London and Advision Studios in West London.

The album was Bowie's first with the nucleus of what would become the "Spiders from Mars", the backing band made famous by The Rise and Fall of Ziggy Stardust And The Spiders From Mars album released in 1972.

Departing from the largely acoustic music of Bowie's second album, The Man Who Sold The World is generally considered a hard rock and heavy metal album and has been compared to contemporary acts such as Led Zeppelin and Black Sabbath.

The album was written and rehearsed at David Bowie's home in Haddon Hall, Beckenham.  The music was largely arranged by guitarist Mick Ronson and bassist / producer Tony Visconti.

It was originally thought that none of the songs was released to the public as a single at the time, though a promo version of “All the Madmen” was issued in the US in 1970.

The title track also provided an unlikely hit for Scottish pop singer Lulu (produced by Bowie and Ronson) and would be covered by many artists over the years, including Richard Barone in 1987, and Nirvana in 1993, who performed a cover of “The Man Who Sold The World” for Unplugged in New York.

The Man Who Sold the World was generally more successful commercially and critically in the US than in the UK when it was first released.

This album is a 2021 reissue on picture disc vinyl housed in a die cut sleeve with a poster and remastered audio, pressed in Germany via Parlophone Records.