Co-produced by Tony Visconti, who also produced many of Bowie's best albums (Space Oddity, Heroes, The Man Who Sold The World, and many others), Heathen sounds like coming home.

It combines the best of Bowie without re-hashing what made him big in the first place, and effortlessly weaves modern production & electronics into his sound.

The original vinyl issues of this release are highly collectable and can go for up to € 200 online.  Music On Vinyl (a vinyl only record label based in Netherlands) have made this highlight of Bowie's work available again to those with smaller budgets. Features guest spots for Pete Townshend & Dave Grohl on guitar!

It was considered a comeback for him in the US market; it was his highest charting album (number 14) since Tonight (1984), and earned some of his strongest reviews since Let's Dance (1983).

Worldwide, it sold more than two million copies and experienced a four-month run on the UK charts. Although its production had started before the September 11 attacks in 2001, the album was finished after that date, which resulted in the influencing of its concept.

This is a Music On Vinyl 180 Gram Audiophile reissue with an Insert, pressed in the Netherlands. 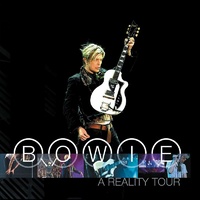