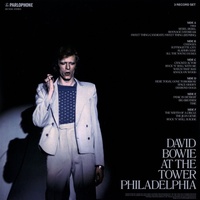 David Live while recorded during the promotional tour supporting Diamond Dogs, Bowie had recently moved towards his “white soul” persona that featured on Young Americans. As a result David Live finds Bowie in transition, with the track rearranged accordingly.

The actual recording process presented it’s own difficulties, particularly with backing singers and sax often off-mike, resulting in the need for studio overdubs.

While met with  mixed reaction from fans and critics alike, David Live performed well reaching Top 10 chart positions around the world. The 2005 remix of the album represented on this edition however has addressed a lot of those concerns rsulting in a wonderful warm feel.

David Live is packed full of favourites from his “glam” era, and is an excellent representation of the ever evolving Bowie. Bowie’s voice is stunning throughout.

Check out the tracks: “Rebel Rebel”; “All The Young Dudes” and "Changes".

This triple LP remastered in 2016 represents the expanded set list as per the 2005 reissue, is pressed in Europe on 180 gram heavyweight vinyl with reproduced original artwork.