Their breakthrough single “Eagle Rock” was released in May 1971 and took the country by storm, reaching #1 on the National Singles charts and staying there for a then record of 10 weeks. The single also spent 17 weeks at #1 on the Melbourne Singles charts, and has gone on to become one of the most enduring pop rock songs ever released by an Australian band.

The album contains 11 songs of which 6 are original songs written by Ross Wilson (“Bom Bom” written by Ross Wilson and Ross Hannaford). The songs reflect a 1950s “Doo-Wop” style that are danceable and fun. Songs like “Blind Date” provided a tongue in cheek social commentary of life in the 1960s. Ross Wilson’s tenor voice is contrasted with the distinctively deep bass tones of Hannaford’s vocals that created a unique sound for the band, which is reflected throughout the album. The backing vocals and arrangements are absolutely perfect and spot-on for the songs.

In the opinion of “The Captain” this is one of the best Australian albums ever recorded and a wonderful set of songs that paved the way for Australian recording artists to be “taken seriously” both in Australia and Internationally. Elton John often talks about how he and Taupin were blown away by Daddy Cool when they toured Australia in the early 1970s. “Eagle Rock” became the inspiration for their song “Crocodile Rock”, and Daddy Cool memorabilia was featured on photos in some of the Elton John album covers released in the early 1970s.

But it is the original songs that really stand out on the album, from “Eagle Rock” to “Come Back Again”, “Zoop Bop Gold Cadillac” and “Bom Bom”. One of the best songs on the album is “Blind Date”, a humorous commentary on dating at that time, with unique backing vocals on the song. It’s another great party song!

The album was produced by Robbie Porter and released in Australia through Porter’s own record label.

This album is a must have addition to any record collection and remains one of the most inspirational Australian albums of all time.

This LP record is a 2017 reissue on black vinyl, pressed in Australia. 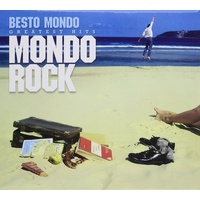