Colter Wall - Songs Of The Plain

Songs From The Plain is the second studio album by Canadian singer songwriter Colter Wall, released in October 2018 via Thirty Tigers.

Colter Wall started learning guitar at the age of 13, playing music of rock bands such as AC/DC and Black Sabbath and Led Zeppelin. Later he became interested in old blues artists, and then started to listen to folk music. He described his music as a blend of blues, folk and Americana.

He has a voice that belies his young age, sounding like he has emerged after a long career in the music, mature and rich in tone that sound reminiscent of 1960s classic recording artists.

Songs From The Plain was recorded at Nashville’s RCA Studio A with Grammy Award-winning producer Dave Cobb. The album features eleven songs including “Plain To See Plainsman”.

The release of Songs of the Plains follows a breakthrough year for the Canadian artist, whose self-titled debut album was released in May 2017 to widespread critical acclaim.

This album is on standard black vinyl with a fold-out lyric insert and download code, pressed in US via Thirty Tigers. 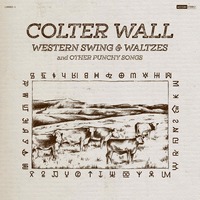