The Observer In The Star House is the eleventh studio album by English ambient house group The Orb, released in August 2012 by Cooking Vinyl Records.

The Orb are known for being the pioneers of ambient house music. Founded in 1988 by Alex Paterson and The KLF member Jimmy Cauty, The Orb began as ambient and dub DJs in London. Their early performances were inspired by ambient and electronic artists of the 1970s and 1980s, most notably Brian Eno and Kraftwerk. Because of their trippy sound, the Orb developed a cult following among clubbers "coming down" from drug-induced highs. The Orb has maintained their drug-related and science fiction themes despite personnel changes, including the departure of Cauty. Paterson has been the only permanent member.

Legendary reggae producer Lee "Scratch" Perry has exerted an almost mystical pull on artists from across the musical spectrum ever since the halcyon days of his Black Ark studio, when he created some of the strangest and most compelling music ever to come from Jamaica.

Some of his resulting collaborations have turned out to be deeply misbegotten; a few have been brilliant. This is one of the latter. The Orb are almost as legendary in electronic music circles as Perry is in the reggae world, but their signature style - a soft and dreamy fusion of house and ambient music - is obviously not a good fit with Perry's sonic adventurousness or his infamously manic (not to say crazy) verbosity.

As it turns out, though, this is one of those situations in which a surface incompatibility masks deep harmony. The Orb do not try to provide faux-Black-Ark reggae grooves for Perry, nor do they make the mistake of treating his improvised lyrics as sacred pronouncements. Instead, they create a rich tapestry of soft but dense rhythmic backing, some of it more house-derived, some of it more reggae-flavoured, over which Perry raps, and then they treat his voice like one instrument among many to be woven in and out of that tapestry.

The approach is dub-wise, but the result is unique - it simultaneously pushes familiar musical buttons and sounds like nothing else that has come before. Listening to this album is a bit like eating comfort food from an alien planet. Highlights include the stately and decorous skank of "Man In The Moon," the tectonically bassy "Go Down Evil", and the richly funky "Thirsty", which is built on a piece of vintage Perry wisdom: "If you're thirsty, drink some water."

Check out the tracks: “Golden Clouds”; "Hold Me Upsetter"; and “Soulman”.

This double LP with printed inner sleeves and a CD copy of the album is pressed in Europe on 180-gram heavyweight vinyl. 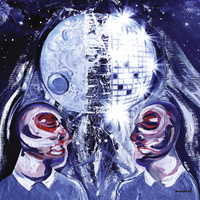