Staying At Tamara’s is the second studio album by British singer-songwriter George Ezra, released in March 2018 via Columbia Records.

George Ezra is a British singer-songwriter who, after releasing two EPs, Did You Hear the Rain? in October 2013 and Cassy O' in March 2014, rose to prominence with the release of his hit single “Budapest”. The single “Budapest” reached the top 10 in numerous countries around the world, including number one in Austria, Belgium, New Zealand and the Czech Republic. His previous work was with singer/songwriter Jordan Grey.

A youthful obsession with Bob Dylan prompted Ezra to seek out earlier American folk and blues artists. "Out of curiosity, I went to find out who he had been listening to," he says. "That's when I found Lead Belly, Woody Guthrie and Howlin' Wolf." Ezra had heard a Lead Belly compilation and had simply tried to sing like him. "On the back of the record, it said his voice was so big, you had to turn your record player down," Ezra says. "I liked the idea of singing with a big voice, so I tried it, and I could."

His debut album Wanted On Voyage was released in 2014 and reached #1 on the UK Albums charts.

The challenge for all artists is how to follow-up a successful debut album with their second, and for Ezra, he headed to Barcelona, where he based himself to write the material for his second album.

He delivers a more expanded sonic landscape on this album with Afrobeat rhythms on “Shotgun” and big choruses on “Paradise”, and a beautiful ballad “Hold My Girl”. The song “Saviour” features a collaboration with Swedish folk-duo First Aid Kit, which is another standout on the album.

All in all, this album shows Ezra to be maturing as an artist and a progression from his debut album, with a set of uplifting songs and melodies.

This LP record is on black vinyl housed in a gatefold sleeve with a printed inner sleeve and CD album copy, pressed in Europe. 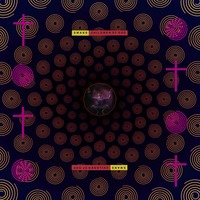