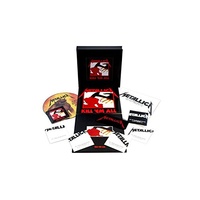 With Kill 'Em All, Metallica rose up from the heavy-metal underground to establish a vital new subgenre, known as speed metal or thrash metal. As pioneered by Metallica, it was a hybrid of punk and metal, distinguished by lightning speed, manic rhythm changes and a thoughtful if outraged approach to lyrics about suicide, religion, war and nuclear holocaust.

Kill 'Em All was the product of what the band calls "riff tapes." Riffs that emerged during practice or jam sessions were committed to tape. Then Ulrich and Hetfield constructed songs from the best riffs. "You start at the top and figure what vibe the song has," Ulrich told Rolling Stone back in 1988. "The general tempo, where you want to take it all. Get an opening. And at one point soon after the opening, you enter into the Mighty Main Riff."

Hetfield's lyrics, by comparison, were the result of "drinking and thinking, seeing what's going on around me." He tackled weighty subjects like spiritual isolation ("No Remorse") and bloody apocalypse ("The Four Horsemen"). The title of the album certainly captures the adversarial tone of the record, although not as graphically as the name the band originally proposed: Metal Up Your Ass.

At the time, Metallica had temporarily relocated from California to New York City, where, according to Hammett, they lived on bologna sandwiches and Schlitz Malt Liquor while rehearsing and recording. "When we started out, it seemed like all the odds were against us," says Hammett. "The sound we had was so different, other people didn't know what to do with us." When label Megaforce told the band that distributors wouldn't go for an album called Metal Up Your Ass, Hammett says, "we were so pissed off that one day Cliff just went, 'Aw, why don't we just kill 'em all?' And we went, 'Yeah, that's it!'"

Kill ‘Em All is regarded as the true birth of thrash, fusing the intricate riffing of New Wave of British Heavy Metal bands with the velocity of hardcore punk tempos. Frightening, awe-inspiring, and absolutely relentless, Kill ‘Em All is pure destructive power, executed with jaw-dropping levels of scientific precision.

Check out the tracks: “Whiplash”; “Jump In The Fire”; “The Four Horsemen” and “No Remorse”.

This 2016 remastered Ultimate Edition Box Set released by Blackened Records includes 5CDs, 3LPs and a DVD, and is pressed in Europe.