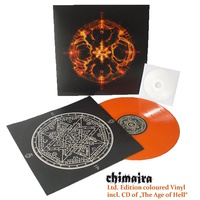 The Age Of Hell is the sixth studio album by American metal band Chimaira, released in August 2011 through E1 Music.

Chimaira are anything but a generic run-of-the-mill band. They have elements of thrash, doom and even grunge in their songs woven into their groove metal template making for quite a varied listening experience. Like all of their albums, each song on The Age Of Hell is a mosh-inducing nugget of groovy goodness with the sprinkling of added melodic elements making for quite the cathartic listen.

The Age Of Hell was a sign of the times for the band, that had many fans waiting a bit eagerly as well as nervously before it dropped. The main reason for this was that only 50% of Chimaira was left with half the band departing shortly before recording began. Despite this, this album is full of surprises!

Importantly the guys we have left in the band included original members Mark Hunter (vocals) and Rob Arnold (lead guitar), both of whom always were Chimaira's main-writers. To fill the void the band drafted some friends play on the album, most notably their long-time producer Ben Schigel who plays the drums on this album. They also had several people come in and do the mandatory keyboards and electronics needed for Chimaira's music, while Rob Arnold also recorded bass guitar.

The Age Of Hell really does sound like a new Chimaira album, although in a different way. Chimaira have expanded their sound towards a more "traditional" thrash/groove sound, really sounding less hardcore than on earlier releases. This is evident in tracks like Born In Blood, which really has a Slayer-esque riff.

Many other songs clearly sound influened by Alice in Chains, especially in the vocal department. Songs like Clockwork and Beyond The Grave are really rocking that Alice-vibe while also sounding quite experimental. This really adds a lot to the album's overall flow and feel, as it feels fresh and interesting.

Year Of The Snake dominated the album, having everything needed for a song to be considered a metal classic, with a brutal breakdown, catchy chorus and a heavy, yet memorable, main riff.

The Age Of Hell is a little bit different compared to Chimaira's other works, but it's a good difference. After all, the band's core members are left, and for this album that was enough.

This limited edition LP on orange180 gram heavyweight vinyl, with a CD copy of the album is pressed in Europe.