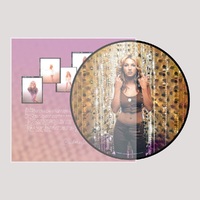 Britney Spears - Oops!...I Did It Again

Oops!...I Did It Again is the second studio album by American singer Britney Spears, originally released in May 2000 via Jive Records.

To celebrate the 20th anniversary of Britney Spears’ unforgettable sophomore album, Oops!...I Did It Again, the album is now available on special edition picture disc vinyl. Her second album followed only a year after the success of her debut album ...Baby One More Time in 1999.

Britney Spears’ sophomore album was another offering of pop perfection for the TRL generation, debuting atop the US Billboard 200 and setting a year-long record for the highest first week of sales by a female performer.

The album was certified 10x Multi-Platinum by the Recording Industry Association of America (RIAA) and was supported by her first world tour, making stops in North America, South America and Europe.

This album is a 20th Anniversary limited edition of 1000 copies on picture disc vinyl, pressed in Europe via Jive Records.