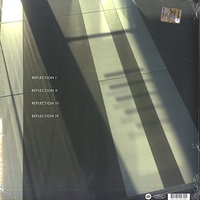 Brian Eno is a musician, composer, record producer, singer, writer, and visual artist. He is best known for his pioneering work in ambient and electronic music as well as his influential contributions to rock, worldbeat, chance, and generative music styles. He has also been an influential producer over the years, working on albums with Talking Heads and Devo, the no wave compilation No New York, and avant-garde artists such as John Cale, Jon Hassell, and Harold Budd.

Writing about the release, Eno says, the pieces on Reflection are “Generative”. He writes: “By that I mean they make themselves. My job as a composer is to set in place a group of sounds and phrases, and then some rules which decide what happens to them. I then set the whole system playing and see what it does, adjusting the sounds and the phrases and the rules until I get something I’m happy with. Because those rules are probabilistic ( – often taking the form ‘perform operation x, y percent of the time’) the piece unfolds differently every time it is activated. What you have here is a recording of one of those unfoldings.”

Accompanied by an extensive text, the album, like it’s title, appears to have provided space for Eno to reflect and rediscover himself in relation to the process of making music.

The overall effect is deeply, magnificently peaceful, meditative. The harder you tune in, the more there is to notice, the more you let it wash over you, the more it sucks you in to reveal internal structures.

Reflection is his latest ambient experiment to shine the sophistication built into the genre. For Eno, ambient music is about creating the endless, about writing songs

The single-track (split into four parts for vinyl) that makes up Reflection, like any good Eno record, allows you to feel consumed, and reminds listeners to experience in their own way, on their own time, to their own image.