In mid-1966, following a whirlwind couple of years in which he became a legend and a reluctant star, Bob Dylan withdrew from the public eye. And he found a reason that was fitting of his testy image at the time: He claimed he was in a motorcycle accident, which fans still dispute to this day. Was it real? Or was it staged so that the increasingly agitated and reclusive singer-songwriter could get away from it all for a while and clear his head?

Whatever the case, Dylan spent the downtime reinventing his music. First, he holed up in a house in Woodstock, New York, with members of the Band and cut what would become known as The Basement Tapes (which, after years of bootlegs, finally received an official release in 1975). Then, during the last couple months of 1967, he went to Nashville to record a new batch of country-influenced songs that ended up on John Wesley Harding.

When John Wesley Harding was released, fans didn’t know what to make of it. For one thing, Dylan’s tough snarl had given way to a warmer, richer tone. And the music – once free-falling and almost carnival-like in its rock ‘n’ roll showmanship – was now tuned down and laid back. It was campfire country music for Summer of Love hippies.

But most of all, John Wesley Harding was one of the clearest signs that one of our most important artists would never be pigeonholed again. Starting with this terrific, mostly acoustic album, any curveballs that Dylan threw over the next four decades would not be totally unexpected. The record’s 12 songs mostly take the form of lazy-day shuffles, casual dialogues between Dylan and his spare backing band (which included a pedal steel guitar player).

Its best songs – “All Along The Watchtower” and “I’ll Be Your Baby Tonight” – sound little like the Dylan of the previous year but, in perspective, they make perfect sense within the evolution of his career. The new style paid off: John Wesley Harding reached No. 2, Dylan’s highest-charting album at that point, and it set the tone for the next several years and albums, where Dylan would dig even deeper into American roots and its place among contemporary music.

John Wesley Harding remains both the foundation of this movement and Dylan’s most significant work in the genre.

Check out the tracks: “Drifter’s Escape”; “John Wesley Harding” and “All Along The Watchtower”. 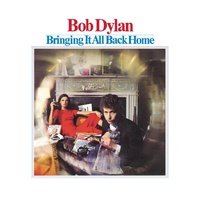