Take Off Your Pants And Jacket is the fourth studio album by American rock band Blink-182, originally released in June 2001 via MCA Records.

The album was recorded over three months at Signature Sound in San Diego with producer Jerry Finn. During the sessions, MCA executives pressured the band to retain the sound that helped their previous album sell millions. Take Off Your Pants and Jacket continues the pop punk tone that Blink-182 had honed and made famous.

Take Off Your Pants and Jacket had immediate success, becoming the first punk rock record to debut at No. 1 on the US Billboard 200 and achieving double platinum certification in May 2002. It produced three hit singles ‘The Rock Show’, ‘First Date’, and ‘Stay Together for the Kids’, each reached the top ten on modern rock charts. The album has sold over 14 million copies worldwide.

This limited LP record is on 180 gram heavyweight black vinyl housed in a gatefold sleeve with a digital download code, reissued in October 2016 via Geffen Records. 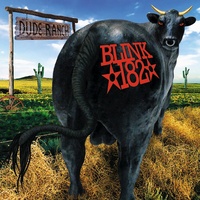