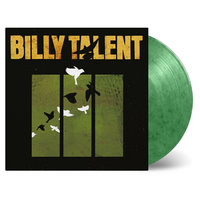 Billy Talent is a Canadian rock band from Mississauga, Ontario. They formed in 1993 with Benjamin Kowalewicz as the lead vocalist, Ian D'Sa on guitar, bassist Jon Gallant and drummer Aaron Solowoniuk. There have been no line-up changes, although Aaron is currently taking a hiatus from the band due to an MS relapse, Jordan Hastings from Alexisonfire, Cunter and Say Yes is currently filling in for him.

After Billy Talent's successful self-titled debut album and their excellent follow-up, they went back to the studio to record their third piece. They added swampy blues-rock to their energetic punk-pop sound.

The album reached the first spot in the Canadian Albums Chart and peaked at #107 on the US Billboard 200. In April 2010, the album won a Juno Award for best rock album of the year.  The record saw five hit singles, with “Turn Your Back” being the first to hit radio. It features guest appearances by members of Anti-Flag.

This album is a limited edition reissue of 2,000 individually numbered copies on 180 gram audiophile green marbled coloured vinyl with a 4 page booklet, pressed in Europe via Music On Vinyl.