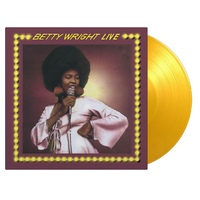 Bessie Regina Norris, better known by her stage name, Betty Wright was an American soul and R&B singer and songwriter, who rose to fame in the 1970s with hits such as "Clean Up Woman" and "Tonight Is The Night". Like Aretha Franklin, Betty was blessed with a four octave voice range and is adept at using the whistle register.

Several of Wright's works have been sampled over the years by hip hop, rock and R&B musicians. The riff from "Clean Up Woman" has been sampled constantly by acts such as Afrika Bambaattaa, SWV, Mary J. Blige, Sublime and Chance the Rapper. Wright's first hit, "Girls Can't Do What Guys Do", was sampled for Beyoncé's "Upgrade U".

Betty Wright was an outstanding performer and this Live album provides much evidence of Wright's vitality as a singer. Besides the wonderful performances of her own hits, she also sounds incredible on her cover of Leon Russell's classic "A Song For You". The album peaked at #63 on the Canadian album charts.

This expanded vinyl edition features two bonus tracks not available on the original album. The live album features the soul classics “Clean Up Woman (medley)”, “Lovin' Is Really My Game”, the international live hit version of “Tonight Is The Night” and the two studio bonus tracks “Clean Up Woman (original 7” version)” and “Tonight Is The Night (original 1974 album version)”.

This album is a limited edition 2020 reissue of 1,500 individually numbered copies on 180 gram audiophile translucent yellow coloured vinyl with two bonus tracks, pressed in Europe via Music On Vinyl.