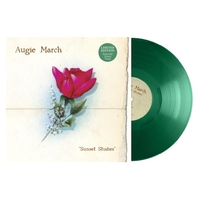 Formed in 1996, Augie March were critically praised for their heartfelt, poetic lyrics and beautiful yet melancholy melodies, lead by guitarist and songwriter Glenn Richards. T

his album was recorded in nine studios with six different engineers between March and September 2000. Featuring the tracks 'The Hole In Your Roof', 'Tulip' and 'There Is No Such Place'.

The lead single 'Asleep In Perfection' was nominated for two ARIA Awards (Best Single/Best Producer) and appeared in the JJJ Hottest 100. The album and won an ARIA for Engineer of the Year.

This double album 2LP record set is a 2021 reissue on emerald green coloured vinyl housed in a gatefold sleeve, pressed in Australia via Sony Music.