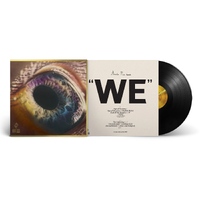 We is the sixth studio album by Canadian indie rock band Arcade Fire, released in May 2022 via Columbia Records.

We is the eagerly anticipated sixth studio album by Arcade Fire.

The album was produced by Nigel Godrich, Win Butler and Régine Chassagne, and recorded in multiple locales including New Orleans, El Paso and Mount Desert Island.

We paradoxically distills “the longest we’ve ever spent writing, uninterrupted, probably ever" (per the band’s Win Butler) into a concise 40 minute epic –one as much about the forces that threaten to pull us away from the people we love, as it is inspired by the urgent need to overcome them.

We’s cathartic journey follows a definable arc from darkness into light over the course of seven songs divided into two distinct sides --Side “I” channeling the fear and loneliness of isolation, and Side “WE” expressing the joy and power of reconnection.

This album is on black vinyl housed in an embossed gatefold sleeve with gold foil lettering, printed inner sleeve and single sided fold out poster, pressed in Europe via Columbia Records.