Frank is the debut studio album by English singer and songwriter Amy Winehouse, originally released in October 2003 via Island Records.

After playing around with her brother's guitar, Winehouse bought her own when she was 14 and began writing music a year later. Soon after, she began working for a living, including, at one time, as an entertainment journalist for the World Entertainment News Network, in addition to singing with local group the Bolsha Band.

Winehouse's best friend, soul singer Tyler James, sent her demo tape to an A&R person. Winehouse signed to Simon Fuller's 19 Management in 2002 and was paid £250 a week against future earnings. While being developed by the management company, she was kept as a recording industry secret, although she was a regular jazz standards singer at the Cobden Club. Her soon-to-be A&R representative at Island Records, Darcus Beese, heard of her by accident when the manager of The Lewinson Brothers showed him some productions of his clients, which featured Winehouse as key vocalist. When he asked who the singer was, the manager told him he was not allowed to say, but Beese had already decided that he wanted to sign her.

Production for the album took place during 2002 to 2003 and was handled by Winehouse, Salaam Remi, Gordon "Commissioner Gordon" Williams, Jimmy Hogarth and Matt Rowe.  Upon its release, Frank received generally positive reviews from most music critics and earned Winehouse several accolades, including an Ivor Novello Award. In the United Kingdom.

Frank has been certified triple platinum by the British Phonographic Industry and had sold over one million copies as of September 2014. Frank entered the UK Albums Chart at #60 before climbing to #13 in late January 2004. Following Winehouse's death on 23 July 2011, the album re-entered the UK chart at #5, before reaching a new peak position of #3 the following week.

This LP record is a "Back to Black 60th Anniversary" series reissue (July 2008) on 180 gram heavyweight vinyl housed in a gatefold sleeve with printed inner sleeve featuring remastered audio and a digital download code, pressed in Europe. 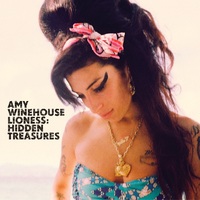