Dirt is one of those masterpieces that wasn't meant to be, as it was written while the band was on tour only to let their demons out. After extensive tours with Ozzy Osbourne and Van Halen the album ended in the Top 10 of the US Billboard 200 albums chart.

The album closes with the superb grunge anthem "Would?" which was also featured in the movie Singles.

The album spawned five singles: "Would?", "Them Bones", "Angry Chair", "Rooster", and "Down in a Hole"; all with accompanying music videos. Dirt was nominated for a Grammy Award for Best Hard Rock Performance.

Unfortunately lead singer Layne Staley died of a drug overdose in 2002 which ended the band abruptly. Alice In Chains returned to the forefront with a new album and singer in 2009.

This album is a 2009 reissue on 180 gram audiophile vinyl with a printed inner sleeve, pressed in Europe via Music On Vinyl. 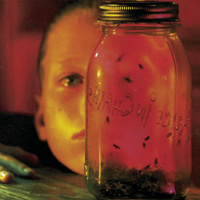