The album features the single "Poison", Cooper's first top ten hit since 1977’s single “You And Me”. Trash was a great success in Cooper's musical career, reaching the Top 20 of various album charts and selling millions of copies.

The album was produced by Desmond Child and continued his resurgence since quitting alcohol in the mid 1980s. Three further successful singles were released from the album “Bed Of Nails”, “House of Fire” and “Only My Heart Talkin”.

This album is a 30th Anniversary limited edition of 2,500 individually numbered copies on 180 gram silver and black marbled audiophile vinyl with a printed insert, pressed in Europe via Music On Vinyl. 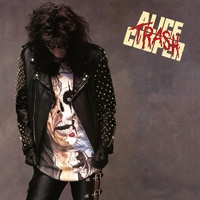