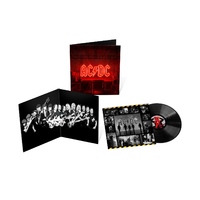 After the turbulence during the world tour for their last studio album Rock Or Bust and the loss of founding member Malcolm Young, the band are back with a brand new album. A nice surprise and in some ways totally unexpected, the band have reconvened with Cliff Williams on bass, Phil Rudd on drums, Brian Johnson on vocals and Stevie Young on rhythm guitar, the same line-up that recorded Rock Or Bust. Brendan O’Brien is back in the fold on production duties, and the album was primarily recorded in Canada.

The songs are all credited to Angus and Malcolm Young, and many of the riffs are reminiscent of classic AC/DC at their best. The songs are all short, sharp and punchy with great guitar riffs, catchy hooks and searing guitar solos. This is one of their strongest releases and the band have not lost their signature sound and swagger.

Brian can still squeeze out those high notes, after all these years and the rhythm section of Williams and Rudd power the songs along at a crisp pace.

The album kicks off with a cracking rocker “Realize”, bringing the listener back to the fold instantly – this is AC/DC back and rocking. The first single released from the album “Shot In The Dark” is another classic rocker. Side A closes out with “Witches Spell” that has a great bass line. Other strong tracks are “Demon Fire”, “Systems Down”, “Money Shot” and the closer “Code Red”.

AC/DC are back in form and they sound like AC/DC. A great tribute to Mal.

This album is on 180 gram black vinyl housed in a glossy gatefold sleeve with printed inner sleeve, pressed Europe via Columbia Records.