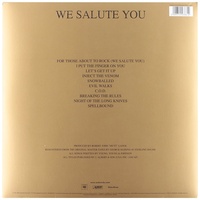 For Those About To Rock We Salute You is the eighth studio album by Australian hard rock band AC/DC, originally released in November 1981 via Atlantic Records.

AC/DC's hot streak began to draw to a close with For Those About to Rock We Salute You. While Back In Black was infused with the energy and spirit of paying tribute to Bon Scott, it became apparent that they missed Scott’s devil may care sense of humour in the lyrics.

The picture on the front of the record says it all: AC/DC are about to blow you away with their high voltage rock'n'roll. The mixture between Brian Johnson's screech and the Young brother's guitars, Cliff William's bass, Phil Rudds' drums, feed on each other and bring out all the best of their music. The title track, with its mellow, but inspiring opening riffs, builds up to a powerfull guitar solo, and something entirely different, the first meeting of a rock'n'roll band and artillery, in a 'twenty-one gun salute'. “Let's Get It Up”, is also something new from the band, combining a funkyish style with trademark catchy riffs. One of their darker songs, “C.O.D.” is is definetly one of AC/DC's best.

With AC/DC the lyrics have always been, and will continue to be based on the rockstar theory of sex, drugs, and rock'n'roll. Songs like “I Put The Finger On You”, “Inject The Venom”, and the incredibly catchy “Let's Get It Up”, illustrate this point very well. Meanwhile the title track just makes you want to pick up your guitar and play.

Overall, this is one of AC/DC's finest accomplishments. It never strays from the AC/DC formula, the mandatory gut-busting solos from Angus, the powerful rhythm section, passionate vocals, driving bass, and as always, the pounding drums.

Highlights include “C.O.D.”, “Inject The Venom”, “I Put The Finger On You”, “Evil Walks”, and of course, the anthem for all those about the rock, the albums amazing title track. For Those About To Rock We Salute You is truly an excellent album from the masters. AC/DC make no apologies.

Check out the tracks: “Let’s Get It Up” and “For Those About To Rock (We Salute You)”.

This LP with remastered audio housed in a gatefold sleeve is pressed in Europe on 180 gram heavyweight vinyl.