Elephant is the fourth studio album by the American alternative rock duo The White Stripes, originally released in April 2003 via V2 Records.

On its release Elephant recieved widespread critical acclaim, with many critics hailing it as one of the defining events of the 2000s garage rock revival, Rolling Stone's David Fricke called the album "a glorious thing to hear" and "a work of pulverizing perfection".

The album debuted at number one in the United Kingdom, reached number six on the Billboard 200 in the US, and reached the No. 4 position on the Australian ARIA Album Chart. The album won Grammys for Best Alternative Album and Best Rock Song ("Seven Nation Army").

Elephant was certified Platinum in Australia, Europe, New Zealand, and the US, and 2x Platinum in Canada and the UK.

Check out the singles from the album "Seven Nation Army", and "The Hardest Button to Button".

This Limited 10th Anniversary Edition Double Album 2LP Record set is pressed on 180 Gram Vinyl and was mastered direct from the original analog source from the 2002 recordings, includes printed inner sleeves and a digital download card, and is housed in a gatefold sleeve, pressed in the U.S. via Third Man Records. 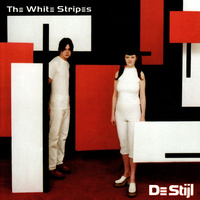