Forget Me Not is the third studio album by Japanese folk pop band John John Festival, released in November 2016.

This is another beautiful album from this unique Japanese band, showcasing their individual talents as musicians and as a collective as a band, which is unique both live and on record.

Check out the tracks:   “Sweet Forget-Me-Not”; “Perth Jigs”; “By The Time It Gets Dark”; and “January Fifteenth”.

This album is on compact disc housed in a cardboard gatefold sleeve, pressed in Japan. 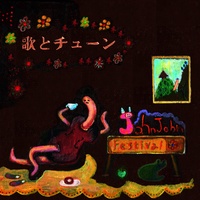