Recorded during their 1984 world tour in support of their 1983 studio album, 90125, the album features a selection of solo tracks performed by each of the five band members, plus live versions of two songs from 90125. The album was an accompany release to the band's 1985 concert film, 9012Live.

9012Live took fans by surprise, expecting a full blown live album, or soundtrack from the film they were greeted with essentially an excerpts album which wasn’t actually Yes material. Irrespective of the actual quality of the material here presented, the mere fact that a live album devoted almost entirely to solo performances was produced by a popular group in the cultural climate of the mid-1980s deserves some measure of support. Shunning the tendency to turn the entire product into a "live versions of hit singles/market saturation" project, the album does produce something entirely unexpected for the lineup in question. For this reason, the album may actually be perversely enjoyable as a novelty recording.

Even if 9012Live: The Solos falls into “completists only” territory, it’s not without its charms. For starters, it’s not as indulgent as one might expect given the title. These “solos” are actually more like interludes where one instrument is featured but accompanied by at least one other member. Which means that sitting and listening to the whole thing from start to finish encompasses much more than just hearing five guys taking turns at noodling. In fact, 9012Live flows way more coherently than it should when you look at its contents on paper.

As a definite selling point for the band’s hardcore fans, Anderson’s “solo” (“Soon”) is actually a reprised section from “The Gates Of Delirium”, an epic-to-end-all-epics from Yes’ 1974 prog classic Relayer. Meanwhile, bassist Chris Squire does indeed strive for beauty and grace with his four-string turn at the traditional hymn “Amazing Grace”. Given how muscular the live rendition of “Hold On” is compared to the studio version, the logic behind excluding most of the video’s songs on the audio version of 9012Live has left many fans and critics baffled.

At the very least, 9012Live: The Solos whets the appetite with evidence that Yes continued to be an invigorating live act even after re-inventing themselves as ’80s-styled synth pop.

Check out these tracks from the album: “Soon”; “Hold On” and “Whitefish”.

This LP album is on 180 gram audiophile vinyl and is pressed in Europe by Music On Vinyl, reissued in August 2016. 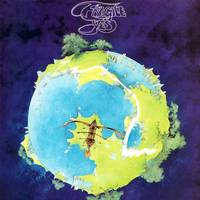