The core line-up of Whitesnake had been working as David Coverdale's backing band The White Snake Band and they toured with Coverdale as his support band and for both of the solo albums he released, White Snake (1977) and Northwinds (1978), between exiting Deep Purple and founding Whitesnake. At this time, the band was made up of David Coverdale, Bernie Marsden, Micky Moody, Neil Murray and drummer David "Duck" Dowle with keyboardist Brian Johnston. Johnston would soon be replaced by Procol Harum organ player and keyboardist Pete Solley. Because of Solley's producing commitments he was replaced by the former Deep Purple keyboard player Jon Lord, during sessions for the first LP.

Their debut album contains straightforward blues rock and sets the mood that their following more successful albums build on; Lovehunter, Come an' Get It and after a break, Saints & Sinners.

Trouble was recorded at Central Recorders Studio in London during the summer of 1978 and was recorded and mixed in ten days, during which Coverdale had his first child, and cites this as one of the reasons the album recieved it's name.

Take Me With You is the first track, a fast paced very heavy song with typical Coverdale lyrics then Love to Keep You Warm, remembered as a Whitesnake classic, largely due to its seductive deliberate strut.  Following this is Lie Down, a live favourite with a catchy tongue in cheek chorus and the heavy Don't Mess With Me following later.

Trouble peaked at  #50 on the UK Album Charts, and Whitesnake toured Europe to promote the album, their first live album Live at Hammersmith recorded during this time.  They increased their fan base, acting as an opening act for established bands such as Jethro Tull and AC/DC. This extra recognition helped with the later release  Live...In the Heart of the City, which went on to achieve a #5 ranking in the UK album charts, showing how from Trouble's moderatly slow start, Whitesnake have become one of the most storied bands in Modern Rock-n-Roll.

The album was produced by Martin Birch and the following personnel were involved in the making of this Whitesnake album:

Check out a couple tracks from the album.  Take Me With You, Lie Down, Don't Mess With Me, and Love To Keep You Warm.

This LP record is on black vinyl housed in a gatefold sleeve featuring remastered audio, pressed in Europe and reissued in June 2014 via Parlophone Records. 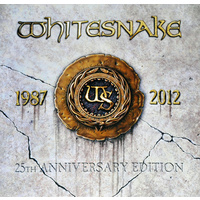