Following up the splendid Saints & Sinners album was no easy task, but Slide It In turned out to be an even greater triumph for David Coverdale's Whitesnake. From the boisterous machismo of "Spit It Out" and "All Or Nothing" to the resigned despair of "Gambler" and "Standing In The Shadow", and the embarrassingly silly title track, everything seems to click.

For hit singles, look no further than the twin guitar attack of "Guilty Of Love" and the sheer poetry and emotion of "Love Ain't No Stranger", one of the decade's greatest power ballads, bar none.

Not to be outdone, "Slow an' Easy" is a masterpiece of sexual tension and the kind of power-blues which no-one does as well as Whitesnake.

The album peaked at #9 on the UK Albums chart and at #42 on the US Billboard 200 Albums chart, making it their highest charting album in the US up to that point.

On a quirky historical note, Coverdale fired most of the band soon after the album's release, replacing them with younger, prettier faces with which to better conquer America.

This LP record is a reissue (October 2016) on white vinyl housed in a gatefold sleeve with a bonus track, pressed in Europe via EMI Records. 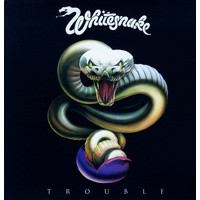