October is the second studio album by Irish rock band U2, originally released in October 1981 via Island Records.

After the success of confident and assured first album Boy, so the mighty U2 were faced with the second album challenge of moving forward without alienating the fan base. October was a slight stumble only because they tried too hard to move forward.

The album also had a difficult gestation with the original lyrics being lost, and tensions within the band, and stands as a testament to their tenacity and ability to judge their audience's tastes.

October contains big political, emotional and religious statements, with impressive music which finds a nice balance without overwhelming the actual songs. When U2 do marry the message, melody, and sound together, as on "Gloria," "I Threw A Brick Through A Window", and "I Fall Down", the results are thoroughly impressive.

The widescreen textures that were to lift the next opus, War, were learned by a resolute approach to touring where, the band kept the flame of their burgeoning fan base alive. October may not have sold as well as the debut, but stands as a fine document of a band finding its legs

Check out the tracks: “Fire” and "Gloria".

This LP record with remastered audio and reproduced original artwork and 16 page booklet is pressed in Europe on 180 gram heavyweight vinyl. 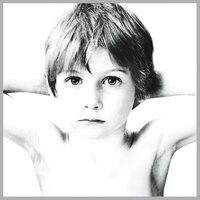