Tom Petty And The Heartbreakers - You're Gonna Get It!

You’re Gonna Get It! is the second studio album by American rock band Tom Petty And The Heartbreakers, originally released in May 1978 via Shelter Records.

You’re Gonna Get It! may have been released two years after their debut, but overall, it boasts an impressive stylistic cohesiveness with its predecessor. What makes the album exciting are the fresh hints of openness and expansion just beneath the surface. The rhythms are a bit looser, and there's a new emphasis on Petty's rough, driving, rock & roll guitar in the mix.

Some of the cuts have a Latinized swing, and you can hear bits and pieces of outlaw grit, urban blues and Los Angeles harmonies everywhere. The slippery, layered textures of sound that occasionally seemed mannered on the first record are completely under control here, and the material is, if anything, stronger.

Petty omits all narrative signposts from his lyrics, depending instead on cryptic, repeated catch phrases and the doomy shifts of the music to flesh out his images. On "You're Gonna Get It", the story is left mostly untold. Instead, a stray piano vamp here, a drumbeat there, and jagged guitars slipping in and out of focus build to create a brooding; violent tension, while the singer sneaks through the cracks in the music. Even during the LP's most upbeat interludes, the aura of undefined menace - coolly accepted as a fact of modern life - is always palpable in the background.

Tom Petty's achievement is all the more remarkable because, for all his eclecticism, he was basically working in a mainstream style, mining the obsessions and quirks beneath the sentimental conventions of Seventies pop. You're Gonna Get It! was a bid to break him loose.

Check out the tracks: “I Need To Know” and “Listen To Her Heart”.

This LP record is a 2011 Record Store Day limited edition on blue vinyl featuring remastered audio and limited to 2,000 copies, pressed in Europe via Reprise Records. 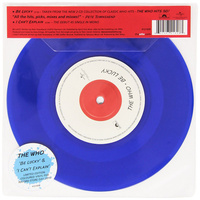