Quadrophenia is the sixth studio album by British rock band The Who, originally released in October 1973 via Track Records.

By 1973 Pete Townshend was courting disaster, fighting demons both interior and exterior. In 1971 he had dealt with the blow of his second full rock opera, Lifehouse, being sunk. An intense work schedule, combined with an inability to turn his ideas into reality, drove him to a breakdown. Added to this was the constant battling between fellow band members. So in retrospect it looks like nothing short of a miracle that he not only salvaged the Lifehouse prime cuts to make the mighty Who's Next, but that he then went on to channel all that into possibly his greatest work: Quadrophenia.

Drawing on his experiences as a young mod-about-town as well as the spiritual quest that had lead him to the feet of his guru, Meher Baba, Townshend created the tale of Jimmy The Mod. A dispossessed youth whose psychological problems were rooted in home life, teenage relationship angst and plain old peer pressure; the anti-hero goes on a metaphorical journey from urban London to the rainswept beaches of Brighton in search of meaning.

The concept was also shoe-horned into the group dynamic by using each member of the band as a signifier for the four personalities that inhabit Jimmy's double schizophrenia, with a recurring theme to match.

While the concept may be unwieldy, as a musical statement it's fabulous. The band could rock harder and looser than most others by this point. Moon's drums, always on the verge of chaos, drive the hit, “5:15” like a wild beast through the very heart of the double album. Entwistle's bass bubbles and restlessly explores all the empty corners of the arrangements while his french horn injects the 'is it me for a moment?' theme seamlessly. Daltry's voice, having proven its maturity on Who's Next was here allowed to roar as Townshend could now write songs to fit his range. The closing, triumphant “Love Reign O'er Me” or the opening “The Real Me” remain amongst his finest moments. Meanwhile Pete's guitar work is at its most expressive and his use of early synths withstands the usual cheese-factor that blights so much music from this period.

Band egos, inflated by the dual pitfalls of fame and indulgence, led to the recording being fraught. There were reported fisticuffs between Pete and Roger. And any appeasing of the writer's inner turmoil was nixed by a gruelling tour (which saw Moon collapse mid-gig on one occasion) and pushed him even further into chemical overload. Yet, as Townshend now admits, and as all Who fans know, everything great about The Who is contained herein. 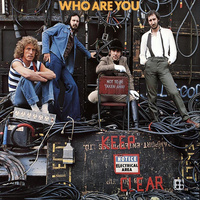