Share:
$49.90
Sold Out
Sadly, this has sold out and we can't get anymore of this release.

In 1999 Rowland S. Howard took the world by storm when he released his debut album Teenage Snuff Film. The album was praised for its "dark dramatic sounds" and went on to become one of the most acclaimed and influential Australian releases of the 1990s.

The album was produced by Lindsay Gravina (Jet, The Living End, Magic Dirt), and recorded at Birdland and Sing Sing studios in Melbourne.

By his passing in 2009, Rowland’s career was truly international and had spanned 34 years, spawning countless notable collaborations, and leaving a blazing legacy that continues to inspire artists and musicians today.

Now long out-of-print and highly sought after by collectors, it is wonderful to see Bloodline reissue this landmark album on vinyl in Australia again.

This album is a limited edition reissue on 2LP 180 gram black audiophile vinyl with a Rowland S. Howard etching on Side D and printed insert, the vinyl is pressed at Pallas in Germany and this 2020 reissue is via Bloodlines Australia. 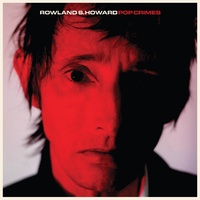