...But Seriously is the fourth solo studio album by British drummer, musician and singer-songwriter Phil Collins, originally released in November 1989 via Atlantic Records.

While much of the album follows the same formula as Collins' previous album, No Jacket Required (1985), there was also a move towards more organic production as Collins chose to utilise live drums instead of the drum machines used heavily on No Jacket Required. He also prominently used keyboards and electric piano but fewer synthesizers. The album also features a sole instrumental track, Saturday Night and Sunday Morning, which recalls the jazz-influenced instrumentals featured on his first two albums, Face Value and Hello, I Must Be Going.

The tone of the album is serious, as the title suggests. Instead of focusing entirely on personal relationships, dark psychedelics and fun, Collins expands his focus to the exploration of socio-economic and political themes. There is emotional turmoil underneath the polished studio production and many of the songs are unambiguous and unveiled in their melancholy.

Another Day in Paradise, which was released as the lead single and became the album's biggest international hit, is a sympathetic look at the plight of the homeless.

Another politically themed song on the album is Colours, which voices Collins' condemnation of the segregation and oppression of black and coloured people in South Africa under apartheid. Arguably the song with the most progressive rock influence in this album (à la Genesis), Colours did not see much commercial success as it is almost nine minutes long and radio stations had no interest in playing it. The political theme is also evident in the second song on the album That's Just the Way It Is, which deals with The Troubles of Northern Ireland.

The album also features a dramatic, gospel-influenced track, I Wish It Would Rain Down, which features Eric Clapton prominently on guitar and became one of the album's biggest hit singles.

Father to Son is a song in which Collins explores his connection with his own son. The song has a positive, inspirational tone as he seeks to guide his son through some of the trials of life and love, and to reassure him that, "if you look behind you, I will be there".

The album was recorded at The Farm, Surrey, England, and at A&M Studios, Los Angeles, United States and again produced by Phil Collins and Hugh Padgham.

The album was hugely successul and topped the albums charts in the US, UK, Australia, Canada and many other countries.  It remains one of Phil Collin's most successful albums to date. 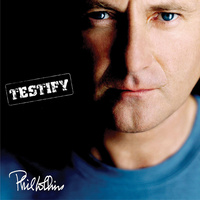