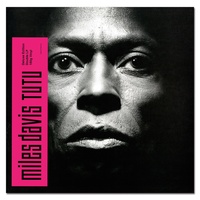 Originally planned as a collaboration with pop singer-songwriter Prince, Davis ultimately worked with bassist and multi-instrumentalist Marcus Miller. Miller wrote and arranged all the songs, except "Tomaas" (co-written by Davis), "Backyard Ritual" (by keyboardist George Duke), and "Perfect Way" (by pop group Scritti Politti). The music is strongly inspired by mid-1980s R&B and funk, with heavy use of synthesizers, sequencers and drum machines.

The album is named in tribute to Archbishop Desmond Tutu, the first black Anglican Archbishop of Cape Town, South Africa.

The cover was designed by Eiko Ishioka and photographed by Irving Penn. Eiko Ishioka received the 1987 Grammy Award for Best Album Package for her work as the art director.

The original vinyl album featured a coloured inner sleeve printed with the album credits on one side and a photograph of Davis' left hand (with middle finger depressed) on the reverse.

Tutu divided critics and listeners when it was released in 1986. Like Davis' pivotal 1970 album Bitches Brew, Paul Tingen wrote, Tutu became one of the "defining jazz albums" of its decade and attracted a young, new audience while alienating many other jazz listeners because of its heavy reliance on the drum machine and synthesizers.

Check out a couple of tracks from the album:  Tutu, Portia, Perfect Way and Full Nelson.

This is the Deluxe Edition Double LP on 180 Gram Vinyl featuring the Original Album Remastered on LP1 and Bonus Material on LP2, Live at the NIce Festival, France, 1986, pressed in Europe.