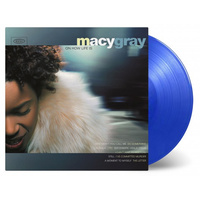 Macy Gray - On How Life Is

On How Life Is is the debut studio album by American singer-songwriter Macy Gray, originally released in July 1999 via Epic Records.

Macy Gray’s debut album became a critical and commercial success for the singer-songwriter who has a very distinctive voice. She had been singing in a number of jazz clubs after completing her schooling, and had initially been signed to Atlantic Records, however the label dropped her after some personnel changes. After being convinced to return to music, she was signed to Epic Records and recorded her debut album, which was produced by Andrew Slater.

The release of the second single from the album “I Try” broke her into the mainstream music charts, reaching #1 in Australia, #5 in the US and #6 in the UK. Three other singles were released from the album “Do Something”, “Still” and “Why Didn’t You Call Me”.

The album has sold more than 3 million copies in the US, reaching #4 on the Billboard 200 Albums chart. In Australia, the album reached #1 and #3 on the UK charts.

With a contemporary mix of hip hop minded soul, Gray has been a force to be reckoned with ever since. She's also a reflective musician who can speak earnestly of the pangs of love and relationships.

The album was met with highly positive reviews from music critics, who praised her raspy voice and the adventurous abilities.

Macy Gray's debut album is arguably one of her best.

This 20th Anniversary Edition LP record is on 180 gram audiophile blue coloured vinyl, with a printed insert, limited to 1,500 individually numbered copies, pressed in Europe via Music On Vinyl.