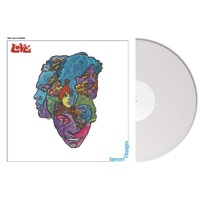 Forever Changes is the third album by the American rock band Love, released in November 1967 via Elektra Records.

Love was most prominent in the late 1960s and early 1970s, originally led by singer / songwriter Arthur Lee who wrote most of the songs, although some of their best known songs were written by guitarist / vocalist Bryan McLean. Love were one of the first racially diverse American bands, and have been labeled as a psychedelic / folk rock band, combining elements and influences from folk, blues, jazz, flamenco and baroque.

Forever Changes failed to achieve commercial success when it was first released in 1967, but it has since become recognized as one of the finest albums to come out of the “Summer of Love”. It was inducted into the Grammy Hall of Fame in 2008 and added to the US National Recording Registry in 2012.

Lee's material for Forever Changes was drawn from his lifestyle and environment. The songs reflected upon grim but blissful themes and Lee's skepticism with the flower power movement. The album also brought about a sense of urgency for Lee. With his band in disarray and growing concerns over his own mortality, Lee envisioned Forever Changes as a lament to his memory.

The title of the album came from a story that Lee had heard about a friend-of-a-friend who had broken up with his girlfriend. She exclaimed, "You said you would love me forever!," and he replied, "Well, forever changes." Lee also noted that since the name of the band was Love, the full title was actually Love Forever Changes.

Sharp electric guitars dominated most of Love’s first two albums, and they make occasional appearances here on tunes like A House Is Not A Motel and Live And Let Live, but most of Forever Changes is built around interwoven acoustic guitar textures and subtle orchestrations, with strings and horns both reinforcing and punctuating the melodies, creating a more gentle, contemplative, and organic sound.

While Forever Changes reflects the angst of a group undergoing some severe internal strife, it is also an album that heralds the last days of a golden age and anticipates the growing ugliness that would dominate the counterculture in 1968 and 1969; images of violence and war haunt A House Is Not A Motel, the street scenes of Maybe The People Would Be The Times Or Between Clark And Hillsdale reflects a jaded mindset that flower power could not ease.

The twin specters of race and international strife rise to the surface of The Red Telephone, romance becomes cynicism in Bummer In The Summer, the promise of the psychedelic experience decays into hard drug abuse in Live And Let Live, and even gentle numbers like Andmoreagain and Old Man sound melancholic.

Forever Changes is inarguably Love's masterpiece and an album of enduring beauty, but it's also one of the few major works of its era that saw the dark clouds looming on the cultural horizon, and the result was music that was as prescient as it was compelling.