Trane: The Atlantic Collection is a compilation album by American Jazz saxophonist and bandleader John Coltrane, released in January 2017 via Atlantic Records.

While there have been several John Coltrane Atlantic years compilations, Trane: The Atlantic Collection is one of the most concise and useful introductions to the legendary saxophonist.

Focusing on the years 1959 to 1961, Trane: The Atlantic Collection offers up a thumbnail sketch of Coltrane just as he entered the first truly individualistic stage of his career. Previously, he had primarily made his mark as a sideman with trumpeter Miles Davis, with whom he had just recorded the landmark Kind Of Blue, when he signed with Atlantic.

Backed by a formidable cadre of musicians, at times including pianist McCoy Tyner, bassist Steve Davis, and drummer Elvin Jones, Coltrane embarked on a creatively fruitful period in which he recorded some of his most influential original pieces, including the innovative "Giant Steps", the sun-dappled ballad "Naima", and the groove-oriented "Cousin Mary".

It was also dichotomously the time in which he scored one of his biggest hits with his entrancing soprano sax-led reading of "My Favorite Things," included here in its condensed 45-rpm version. We also get his expansive, bluesy, early attempt at spiritual jazz "Equinox".

Ben Ratliff's insightful liner notes, help frame the moment and put Coltrane's Atlantic years in context to what came before and after. Ultimately, while there are certainly more extensive Coltrane sets Trane: The Atlantic Collection is a welcome primer highlighting one of the saxophonist's most compelling periods.

Check out the tracks: “Naima”, “Giant Steps” and “My Favorite Things”.

This compilation LP record is pressed in Europe on black vinyl. 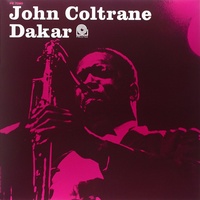