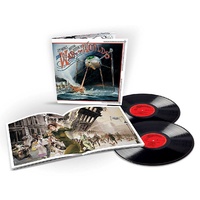 Jeff Wayne's Musical Version of The War of the Worlds is the debut studio album by British musician Jeff Wayne, originally released in September 1978 via Columbia Records in the US and CBS Records in the UK.

The Musical Version of The War of the Worlds was created by composer and musician Jeff Wayne based on the 1898 novel by H. G. Wells. The album was composed and scored by Jeff Wayne with lyrics provided by English lyricist Gary Osborne, who wrote the lyrics for Elton John’s 1978 album A Single Man.

The album features many musical refrains throughout the album that are identified with the characters in the story, such as the “Ulla!” cry made by the Martians.

The album is a progressive rock concept album, which tells the story using a combination of narrative and musical songs and themes. The album is very much in the same storytelling theme as Rick Wakeman’s Journey To The Centre of the Earth and King Arthur albums, released in the early 1970s.

Jeff Wayne and his partner Doreen Wayne used passages of the original novel to form the narration spoken throughout the album.

The musical themes work perfectly for the story and “The Captain” still remembers having hours of listening enjoyment with this album, sitting with the large illustrated booklet, imagining what it must have been like for the characters living through such an invasion by Martian aliens.

Jeff Wayne assembled a stellar cast of musicians to perform on the album and legendary British actor Richard Burton played the role of the Journalist narrator for the album. Other featured vocalists were Justin Hayward (performing “Forever Autumn” and “”The Eve Of The War”), Julie Covington (playing Beth), Phil Lynott (playing the Parson), Chris Thompson (performing “Thunderchild”), Jo Partridge (performing The Heat Ray), and David Essex (performing The Artilileryman).

The album was a huge success, yielding two successful singles from the album “Forever Autumn” and “The Eve of the War”.

The album itself spent 330 weeks in the UK album charts and sold more that 15 million copies to date. It was in the Top 10 in 22 countries and reached #1 in 11 countries, including Australia.

Nearly 40 years on, based on HG Wells’ dark Victorian tale, Jeff Wayne's Musical Version of The War of The Worlds remains a firm favourite to millions of music fans around the world.

To celebrate the 40th year since the album was released, Sony Music have reissued the original double vinyl album on 180 gram heavyweight vinyl featuring remastered audio and the original artwork replicated, including the 16 page booklet with the full script, lyrics, paintings and credits.

Check out the tracks:  “The Eve of the War”; “Forever Autumn”; “Thunderchild” and “The Spirit of Man”.

This double album 2LP record set is a 2018 reissue on 180 gram heavyweight vinyl housed in a gatefold sleeve with 16 page booklet and remastered audio, pressed in Europe.